Skip to content
There are three types of Pipistrelle bat here in Northumberland: Nathusius, Common and Soprano. Read on for more information about each species.

Also known as the Bandit Pipistrelle or the 45 pip, these bats are the most common bats in the county, but not nearly as common as they should be, which is why they are still protected.

Common Pipistrelles echolocate at around a peak frequency of 45kHz, or their calls sound loudest and clearest when a bat detector is at 45kHz. Click here to hear a sound recording.

Common Pipistrelles are small bats, with a wingspan of only 180-250mm. They weigh only 3.5-8.5g and are about the size of a teabag. They have dark skin and fur with a bare face (hence the Bandit name) and have a light, fluttery flight pattern and like to hunt midges along the tops of hedges in gardens and around street lights. 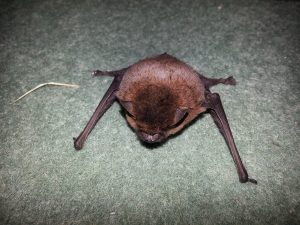 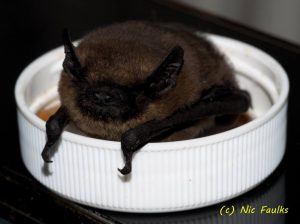 They are sociable with each other and live in maternity roosts of around 60-80 females but sometimes as many as 200 in one roost. Males roost in very small groups, or singly, and move about a lot. They are crevice bats and squeeze themselves into tight spaces such as inside a cavity wall, behind hanging tiles, in the gap formed between barge boards and soffits or in a flat roof; they like modern housing, but even so it is rare that the bat and human residents cause problems for each other.

Each bat can eat over 3000 midges a night, so a lot of householders are quite keen to keep their bats! These bats do not smell or cause problems to buildings under usual circumstances.

They move only about 20km from summer roosts to hibernation in hollow trees, cool stone buildings, rotten window frames and cavity walls of houses. They will use the same roost year after year.

Also known as the 55 pip, these bats have only recently been separated from the Common Pipistrelles; we are still working out their exact distribution and characteristics. These bats are also fairly abundant in bat terms, but as stated earlier bats are not as abundant as they should be in general terms! It may be that about half the old ‘Pipistrelle’ roosts are actually Soprano Pipistrelles rather than Common ones.

Generally speaking, Soprano Pipistrelles are more often associated with woodland and rivers than Common Pipistrelles and they are a more ‘rural’ bat, but on the whole they are very similar…

These bats were originally considered to be uncommon, but results from the national Nathusius’ project as well as our very own NBG members’ work, have shown these bats to be quite wide spread in the UK,  but at low population level, Nathusius’ bats have been recorded in a number of location in Northumberland and Tyneside.

As a pipistrelle species, Nathusius’ bats look very similar to the previous pipistrelle species. But, they have some very different behavioural characteristics.  They are a migratory species distributed widely and patchily across Europe but most often found in Eastern Europe.

Nathusius’ bat having just been ringed as part of the Nathusius’ Project.

They are bigger than both the Soprano and Common Pipistrelles and are known to fly very long distances: a Nathusius’ pip has been found in Jersey having been ringed in Germany! They echolocate at around a peak frequency of around 35kHz, or their calls sound loudest and clearest when a bat detector is at 35kHz. Otherwise they sound exactly the same as the other 2 pipistrelle species.

Research suggests this species likes large lakes as a hunting ground. Which may be why they are often found on the east coast associated with lakes such as at the QE2 Country Park north of Ashington.