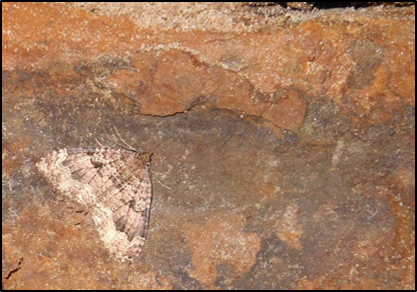 This month we managed to survey all the sites on one day with volunteers from Northumberland, Cumberland and Durham bat groups, it’s good to work with members of different groups and share skills and biscuits.This season has been great for finding bats. We recorded 12 bats in December and we found 14 on Saturday which is our highest ever January count.

January can be very variable; the next highest count was 11 bats in January 2015 but in January 2016 we had one survey with no bats and only two bats on a return visit.

Many of the bats were still in the same place as in December, suggesting no movement between surveys, but in one adit we did not find the Daubenton’s bat which we had recorded twice already this winter, but we did find a Natterer’s bat. We have found that bats do move around more than I originally expected during hibernation

The other notable record was that the two brown long-eared bats in the road culvert were still there, one had moved, one had not.

The adit near to this did have a Daubenton’s bat in it this time, this fits with the pattern of data I noted last time, we have only found a bat in there twice in December, with all the other records for January, February and March, so maybe this bat (we usually only find one Daubenton’s bat) has an early and a late winter roost site preference….

We had enough teams to survey a lesser visited site, we have now looked here six times, once each winter, and we have yet to find a bat despite it looking like a really good site. There were lots of fresh otter Lutra lutra tracks within this adit, but I don’t think this is the reason we haven’t found any bats here as we do find otter tracks in most of the adits.

The bat counts were high, but the moth counts were low, we only recorded one tissue Triphosa dubitata and 133 herald Scoliopteryx libatrix across 12 sites.

Thanks to everyone who came, I really appreciated your help, laughter and the cakes and biscuits! Bat shaped biscuits no less….thanks Helen