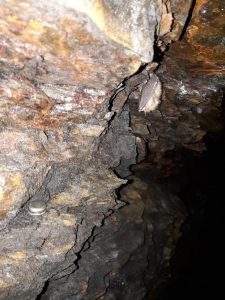 The surveys took place over two days to ensure all the sites were covered at least once. I think the first day was the windiest day I have ever been up there trying to get to the top adit! The first survey was wet, cold and windy, but by contrast the second date was mild and still, although there was lying snow in places.

We found nine bats in early December, a good count. The totals were six Daubenton’s bats Myotis daubentonii and three brown long-eared bats Plecotus auritus in five different adits, we didnt get to all the sites due to impending darkness and just generally the fact we were all very wet!

In late December the count was 12 bats, the highest ever for a December count. We found six Daubenton’s bats, one Natterer’s bat M. nattereri and five brown long-eared bats.

We have been surveying these sites since 2014 and on this visit a Natterer’s bat was found in the top adit (a great find, Grace), the first time we have recorded that species there, in our second most used site. It still amazes me how/why bats find this remote adit which is over 600m above sea level. 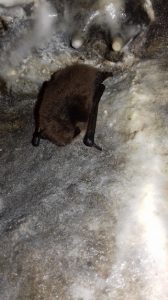 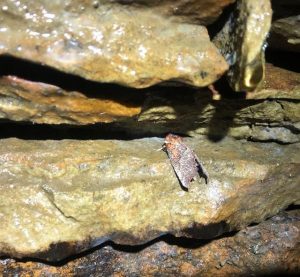 What is interesting is the lack of Natterer’s bats, they used to be our most recorded species but are now seldom seen. No idea what that is about.

Its not just the bats, we also record the hibernating moths, with 131 herald Scoliopteryx libatrix and six tissue Triphosa dubitata found on the second date.

So thanks again for your help, and cake, thanks Jo, especially braving that weather, hopefully it hasn’t put you off and I will see you again on another count, Tina.